Hi! I started the Love-me-back TREE project before the International climate conference COP26 in Glasgow in 2021. However, at COP26 the world made new promises to stop deforestation.

The Love-me-back TREE offers a small opportunity to participate in this important climate initiative. That’s my hope. Tape your tree to your desk, window sill or elsewhere. Let’s start a conversation!

Here’s the story about my tree that got me started on this project!

Some Resources for learning about trees in the Great Lakes region

Many thanks to Rinck Heule, Shannon Gerard, Kenny Lam, and Natasha Overduin for suggesting Richard Power’s novel Overstory. The project poster and story was produced on a Riso printer with soy-based ink on responsibly sourced paper at OCADU.

At the moment, I’m researching herbal books, florilegia in plural, printed all over Europe starting in the 1400s an onwards. This includes The Herball, or Generall Historie of Plantes by John Gerard produced in 1597 in London. In 1639, Thomas Johnson ‘expanded’ Gerard’s herbal and freely copied the gorgeous engravings of the plants. Amazingly, a copy of the Johnson edition is available in the Toronto Reference Library. Here’s what happened when I decided to have a look at it.

On a bright, winter day I walk through two sets of glass doors into the special collections room at the Toronto Reference Library. No drinks allowed. No coats, bag or pens allowed either anywhere on the circular tables. My excitement builds. The open, two-storey space is dimly light and dead quiet. A staff member pushes a metal cart into the room. On it: THE BOOK! I’m provided with two black, foam triangles to hold up the fragile, perfect-bound  spine wrapped in a dark brown cover that still seems to faintly smell of leather. I’m not supposed to lift the book. It probably weighs as much as a large bag of potatoes. The yellowing, onion skin pages crackle as I carefully flip through the Herball. Old English words decorate – yes decorate – hundreds of huge pages. I  notice a stunning wood engraving of a garden crocus.

(Yes, the engraving appears in other herbals; no worries about copyrights back then. But too much story here).

So, a few days later I discover the library has an e-book edition available of yet another herbal. Culpeper’s Complete Herbal can be downloaded in a few minutes for free. Cool. Sad also. Is this a book? (Left: photo of e-book on Kobo)

As I ponder this question, let’s smell the roses!

Skip to my art installation

Auguste Rodin initially imagined his sculpture of Eve (1881) would be part of  his much larger work  Gates of Hell. However, the artist decided to exhibited Eve as an independent sculpture to high acclaim in Paris in 1881.

Why Rodin broke with long-standing convention, dating back centuries, to depict Eve without the apple and without Adam is unclear to me. (Adam and Eve are sometimes depicted together, but without an apple, when fleeing paradise which happens after the famous apple scene.)

My own reading of the sculpture tells me that Eve’s body posture expresses such agonizing regret and guilt, no apple is needed to remind the viewer of her role in throwing the world into more or less permanent disarray. In short, the woman has dropped “the forbidden fruit” because, to be blunt, there’s no doubt in Rodin’s own mind or the minds of much of patriarchal society, that she’s guilty as hell.

My installation Hey, did you drop something intends to question in a humorous way the male patriarchal explanation for the existence of evil: “’Why do bad things happen to good people?’ Obviously because a woman ate the forbidden fruit!”’ Specifically, I intend to trivialize the agonizing Eve and all she represents by asking her to pick up the apple and take a healthy, happy bite out of it.

Many thanks to Toronto sculpture Kip Jones and the technicians at OCADU for helping me produce the bronze apple.

Footnote: I’ve had opportunity to see Eve at the Frederick Meyer’s Sculpture Gardens in Grand Rapids, MI, on several occasions when visiting family. Every time I see it, I feel deeply moved by this sculpture. I’m not questioning the work itself, but rather the unfortunate myth it represents in such a powerful way.

Stickers on fruits and vegetables are officially known as PLU codes or price look-up codes.

Initially, in the 1990s, they contained bar codes only to facilitate inventory control. Soon, logos and website URLs were added. Now they are rather ingenious, tiny billboards.

In fact, a PLU sticker turns a banana into a brand. It doesn’t stop there. For example, put a few lettuce heads into a plastic bag, and, surprise, they turn into a “value-added vegetable product.” The “value-added” piece translates into more profit for food distributors, presumably because putting lettuce heads into a plastic bag with a PLU code on it makes our lives more convenient.

The 1400 PLU codes in circulation around the world today symbolize the globalization and the commercialization of basic food commodities.

I’ve been exploring this theme in the PLU Codes Project. This multi-year project includes a series of multi-media visual art pieces — all of them intended to make you smile, and, maybe, make you pause for a moment. I welcome your comments.

Have you noticed the “flushing signs” popping up in public bathrooms? With the gradual switch to electronic toilets, we seem to be a bit confused these days about bathroom etiquette.

To flush or not to flush?

My most recent example (left) comes from the wonderfully renovated Robertson building on Spadina Street in Toronto.

No-touch taps, no-flush toilets, no-touch hand dryers, automatic soap dispensers — it seems to be a trend. What’s the end goal, I ask? Will it cut the spread of germs? Suggestions?

Please send me your photos of similar signs! I’ll eventually share my growing collection of these types of signs that help us navigate the brave new world of hi-tech bathrooms. 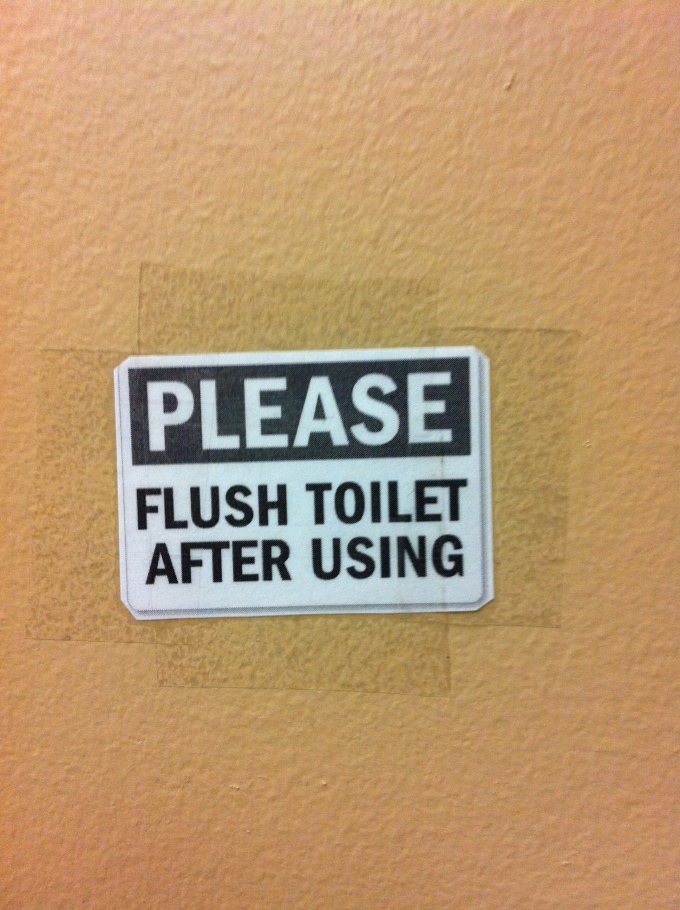